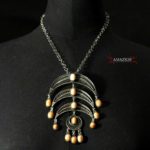 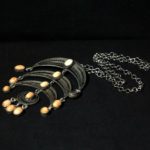 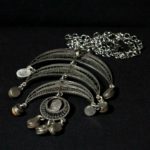 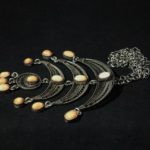 The pendant it’s formed from 4 crescents moon. The crescent shape is used to represent the Moon, and the Moon deity Nanna/Sin from an early time, visible in Akkadian cylinder seals as early as 2300 BC. The crescent was well used in the iconography of the ancient Near East and was used transplanted by the Phoenicians in the 8th century BC as far as Carthage in modern Tunisia. The crescent and star also appears on pre-Islamic coins of South Arabia