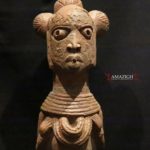 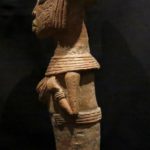 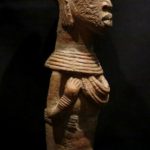 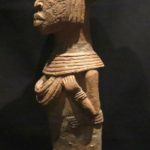 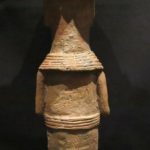 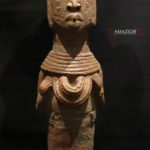 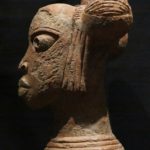 This piece has not been tested for age. It comes from the Grassi family (Sarzana, Italy) and was collected in the 1960s.

The Nok culture is an early Iron Age population whose material remains are named after the Ham village of Nok in Kaduna State of Nigeria, where their terracotta sculptures were first discovered in 1928. The Nok Culture appeared in northern Nigeria around 1500 BC and vanished under unknown circumstances around 500 AD, having lasted approximately 2,000 years.

As a result of erosion and mining, one of the oldest and most sophistcated art-producing cultures known in sub-Saharan Africa came to light in the mid-20th century.

Little is known of the original function of the pieces, but theories include ancestor portrayal, grave markers, and charms to prevent crop failure, infertility, and illness. Also, based on the dome-shaped bases found on several figures, they could have been used as finials for the roofs of ancient structures.