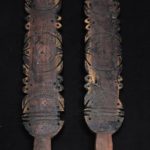 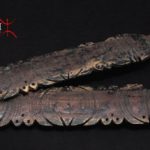 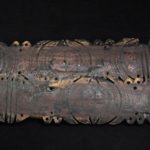 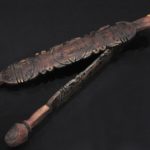 Mid-XXth century or earlier. Hardwood, traces of paint. Cm. 74,0 high x 10,8 width (29.13″ x 4.25″). Attractive patina, beatifully carved and minutely engraved. A variety of poles is used in the jaima, the tuarg tent. They are often richly decorated and they may then turn into symbols of status. This particular piece is called Ame Ssaqqab. It is used inside the Jaima and, four of them, are used to set a sort of litter on a camel. Original repairs. The Tuareg people inhabit a large area, covering almost all the middle and western Sahara and the north-central Sahel. They are probably descended from the ancient Libyan people of the kingdom of the Garamantes, described by Herodotus. Tuareg are mostly nomads. For over two millennia, the Tuareg operated the trans-Saharan caravan trade connecting the great cities on the southern edge of the Sahara via five desert trade routes to the northern coast of Africa (Mediterranean).