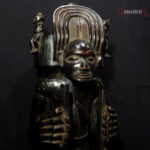 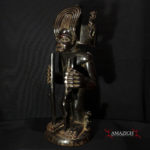 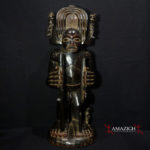 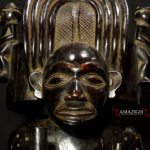 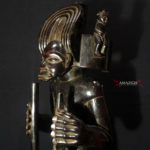 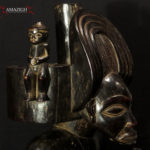 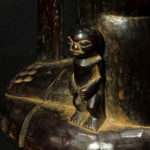 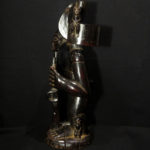 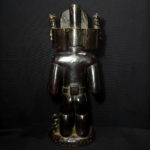 Prince Chibinda Ilunga is the legendary hero and hunter originally from the powerful Luba kingdom, which developed from the beginning of the sixteenth century to the end of the nineteenth century in the territory of today’s Democratic Republic of Congo.

According to legend, in the 15th century the prince married a queen Lunda named Lueji and because the aristocracy did not like the marriage, the young couple migrated south to present-day Angola, giving rise to the Chokwe kingdom.
The Chokwe people today consists of about one million individuals, spread over a large area in eastern Angola, south of the Democratic Republic of Congo and Zambia.

In this representation, the hero Chibinda Ilunga, an idealized figure of a mythical ancestor, presents large hands and feet, with strong shoulders in a proud posture, signifying the strength and power of the leader and the warrior.
In the arrangement of the volumes shines through the pride of the leader, who created the union between two peoples: the Luba and the Chokwe.
The protruding forehead and large eyes emphasize intelligence and wisdom. In the right hand the figure holds the stick called “cisokolu” and in the left hand a rifle, both symbols of power.
The showy headdress identifies him as a chief, while the beard indicates her aristocratic position. On the large hat and next to the left leg there are three finely carved figures.