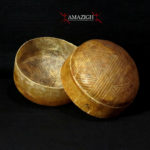 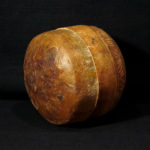 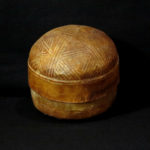 A Tuareg box known as “dagabat” from the region around Agadez in Niger. Tuareg women stretch wet vellum over clay forms to make the dagabat and trim the excess leather before tying them up and sitting them out to dry.  Once dry cotton string dipped in wax is laid on the surface in a pattern.  The dagabat is then soaked in a pot of crimson dye rendered from sorghum husks.  The dagabat are then dried, the waxed strings are removed.