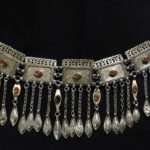 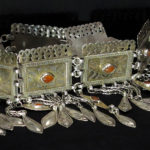 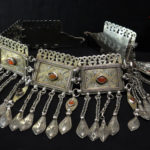 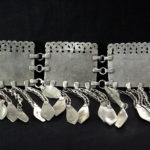 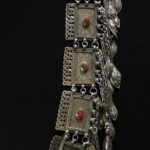 The Turkmen were pastoral nomads who lived in encampments, raised livestock, bred horses. In order to ensure year-round green pastures for their animals, the tribes moved two or three times a year. While not merchants themselves, the Turkmen were in constant contact with urban populations, and were often involved with providing transport and security for long-distance caravan trade.

Although nominally Sunni Muslim, the Turkmen kept many of their pre-Islamic customs and beliefs, which were often embodied in the jewelry they made and wore. Turkmen silver jewelry carried deep symbolic meanings and often marked an individual’s passage from one stage of life to another. From a very early age, a woman started wearing jewelry whose shapes and materials were believed to ensure her ability to bear healthy children later in life. The amount of embellishments a girl wore increased as she approached marriageable age. Once she had had her first children, and her fertility had been established, the amount of jewelry she received and wore decreased. In addition, silver jewelry believed to ward off evil and illness was worn by men, women, and especially by children.

Jewelry was a significant financial investment, as it was handcrafted from precious materials. There were cases when, in times of dire need, a woman would part with her jewelry in order to help the survival of the tribe. Significant in size and weight, Turkmen jewelry objects were made of silver, decorated with semi-precious stones, and sometimes gilded for an added color effect and value.

For more information, Old Silver Jewellery of the Turkoman, by Dieter and Reinhold Schlechter 1983.