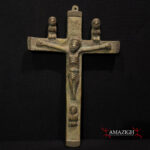 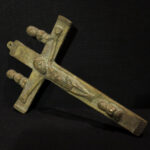 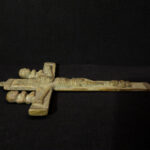 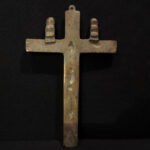 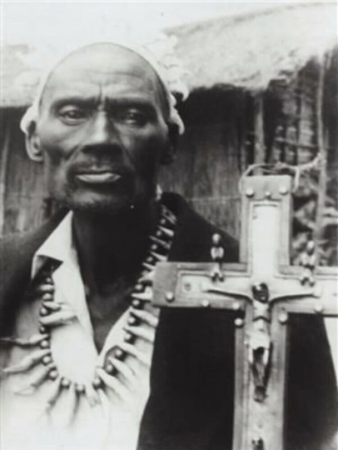 The Bakongo are a large people (more than 5 million) living on the Atlantic coast, along the lower reaches and at the mouth of the Kongo river. In 1482 the Portuguese seafarer Diego Cao reached the Kongo delta, which was at the heart of the powerful Kingdom of Kongo at that time.

The encounter was peaceful and Portugal even established an official embassy in the capital Mbanza Kongo. From 1485 onwards, Christian missionaries came to the Kindgom of Kongo. As early as 3 May 1491, the then king of the Bakongo people, Nzinga Nkuma, converted to Christianity, was baptised and henceforth styled himself as King ‘Joao I’. Most of his countrymen followed his example and merged their former religion (with ancestor cult, gods and magic) with Christianity.

Thus, they knew the hand crosses of the missionaries and, from the 16th/17th century onwards, created their own crosses based on these models. However, the result was a slightly modified, typically ‘Kongolese’ form, called ‘Nkangi Kiditu’: initially as a wooden cross, then with cast figures and finally entirely made of yellow cast-alloy (brass) with ‘waste mould’ casting which is made up of the figure of the Christ and three small figures, two on the crosspiece, one under the Crucified, represent praying persons. All four figures of this typical Bakongo cross have ‘African’ faces.