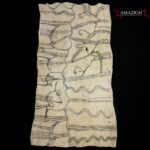 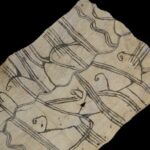 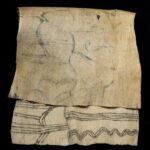 Hand-beaten tree-bark, painted with organic pigments. Approx. cm. 82,0 x 40,0 (32.28 x 15.75 Inches). There is a small triangular hole (see photo), which does not disturb the overall vision; otherwise the fabric is in excellent condition.

Mbuti people, one of the oldest indigenous people of the Congo region of Africa, are one of several indigenous pygmy groups. They arehunter-gatherers that live in the Ituri rainforest. The Mbuti are composed of bands which are relatively small in size, ranging from 15 to 60 people. Survivors of an ancient race that was once dispersed over the African continent, the Mbuti now dwell in scattered bands, ranging from 15 to 60 people, roaming from camp to camp seeking food and shelter. The forest, seemingly inhospitable to outsiders, provides natural protection for the Pygmies.