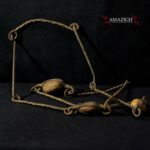 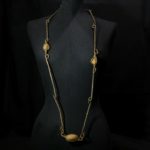 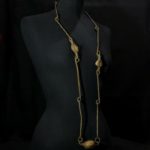 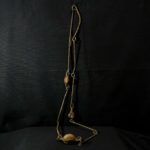 The Binu is a supernatural and protective being that manifests itself to an individual in the form of an animal. Whilst walking through the bush, this individual will be given an object, such as a stone, as a sign of alliance (Duge).

Ethnographic literature has it that the discovery of the Duge by the person in question is proof of his ability to communicate with the spirit world and that consequently it is his duty to assume responsibility as Binu priest.

From there on, the new priest will wear the Duge in the form of a necklace. But in reality, the Duge is not just a stone found in the bush by a person in a trancelike state. It is rather the necklace itself which on the death of the priest, is hidden by family members until the day it is rediscovered by his successor. One says that the Binu “sleeps” until the day the Duge is rediscovered.