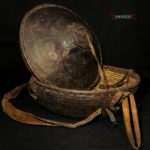 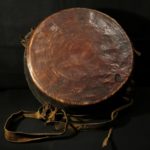 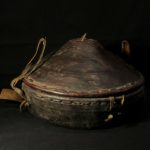 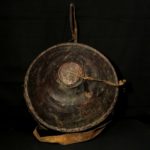 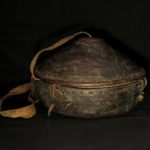 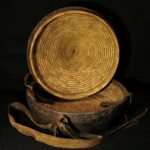 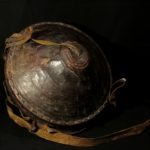 These basket are used to collect Injera, a kind of spongy crepe characteristic of Ethiopian cuisine. Generally they are made from a fermented seed of a local grass on Teff. This object has a basket frame whose outler surface has then been draped in animal skin, which also constitutes the transport strips. Good general conditions; no smell.

The Amharas have historically inhabited the north, central and western parts of Ethiopia, and are mainly agriculturalists, perhaps constituting the earliest farming group in Ethiopia as they mainly produce and use domesticated grains native to their region such as Teff and Nug. Some suggest their origin to be modern-day Yemen (Sheba and Himyar), the Kingdom of Aksum and relocated to (Amhara) Sayint, now known Wollo (named after an oromo clan that migrated to the area in the 16-17th century), a place that was known as the Amhara region in the past.

The Amhara are currently one of the two largest ethnic groups in Ethiopia, along with the Oromo. They are sometimes referred to as “Abyssinians” by Western sources.

The predominant religion of the Amhara for centuries has been Christianity, with the Ethiopian Orthodox Tewahedo Church playing a central role in the culture of the country.