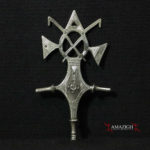 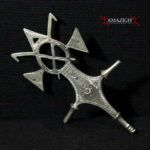 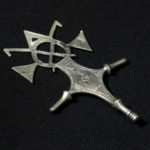 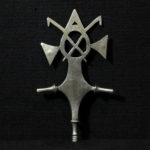 ·         the word ” Cross” is a term attributed by Europeans and is totally unrelated to the Tuareg language;

·         the Cross must be strictly in silver or silver alloy. Silver is the metal of Allah, as opposed to gold , which is considered a demonic metal. Mohammed has formally disapproved all metals except silver. Rings , seals, amulets made of gold, copper or iron are prohibited in the Muslim tradition;

·         the archetype, the first, the true, the progenitor of all Tuareg Crosses is the Cross of Agades, but also those of Iférouane , Tahoua , Zinder and In Gall are considered “anciennes”, that means truly, real, authentic, original. All other crosses derived from these five;

·         Tuareg crosses were passed down from father to son with the words, “I give you the four corners of the world, because one cannot know where one will die”.

·         they derived from the Egyptian Ankh symbol from which would be derived the carteginese symbol of the Goddess Tanit and, finally, the Tuareg Crosses;

·         they are a sex symbol: especially in Agades , Zinder and In Gall crosses is evident the presence of two elements, which can be linked to a stylized depiction of the two sex symbols: the tip, male symbol, and the ring, the symbol of women;

·         they are talismans that protect from the evil eye: in the form of several types of crosses and in the decoration of almost all types appears the presence of triangular elements that constitute the representation more stylized of apotropaic eye;

·         they derived from the Southern Cross : there is an undeniable resemblance between the position of the four stars of the Southern Cross (three of the first magnitude and a forth) and the bottom part of the diamond-shaped Agades Cross.