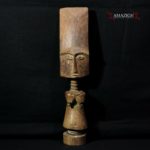 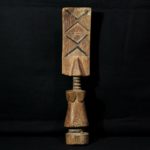 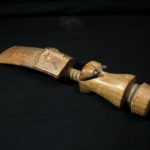 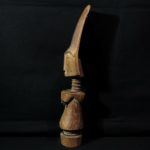 Akua Ba are wooden ritual fertility dolls from Ivory Coast, Ghana and nearby areas. Traditionally, these dolls are carried on the back of women either hoping to conceive a child, or to ensure the attractiveness of the child being carried. When not in active use, the akua’ba would be ritually washed and cared for. The treatment of the Akua’ba has been described as an example of traditional beliefs that corresponds to the occult belief of sympathetic magic.

Traditional use does continue in some areas. The form of the akua’ba has also gained currency as a general symbol of good luck.

The Fante are an Akan people. The Fante subgroup is mainly gathered in the central coastal region of Ghana, with some also in Ivory Coast. Originally, “Fante” referred to “the half that left” and initially settled at Mankessim.