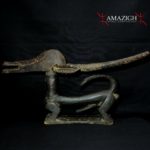 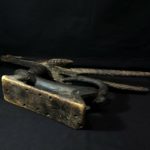 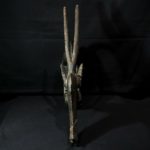 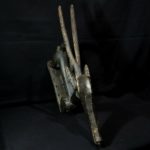 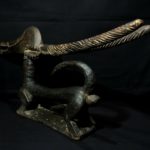 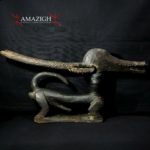 Piece in excellent general conditions; old break on the antelope’s snout which was tribally repaired many years ago.

A Chiwara is a ritual object representing an antelope, used by the Bambara ethnic group in Mali. The Chiwara initiation society uses Chiwara masks, as well as dances and rituals associated primarily with agriculture, to teach young Bamana men social values as well as agricultural techniques.

The Chiwara is usually represented as a Roan Antelope, but also takes shapes of other creatures and emblems of farming. The hero descends from the sky goddess, and thus represents the sun, its body is often elongated and short legged to represent the aardvark who burrows into the earth like a farmer. Its high horns echo the stalks of millet, and it stands on a dancer clad in a mass of raffia stalks to represent both flowing water and a bountiful harvest. The zig-zag patterns echo the movement of the sun across the sky, and the penis of the male figure stands low to the ground, fertilizing the earth.

The Chiwara figures always appear as a male/female pair, combining the elements of fertility of humans with fertility of the earth. The female figure usually carries a young antelope on her back, and is said to represent human beings carried by the Chi Wara hero, as well as a newborn human carried on a mother’s back.