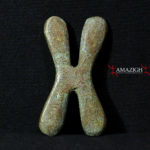 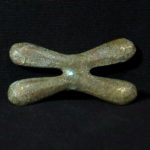 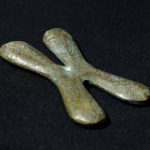 A Katanga cross is a cast copper cross which was once used as a form of currency in parts of what is now the Democratic Republic of the Congo in the 19th and early 20th centuries.

The name derives from Katanga, a rich copper mining region in the south-eastern portion of the DR Congo. These X-shaped ingotswere cast by local coppersmiths by pouring molten copper into sand molds.