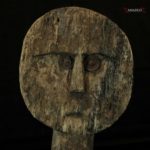 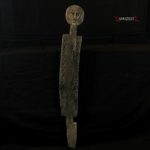 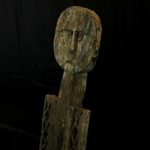 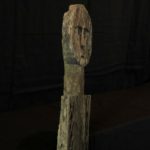 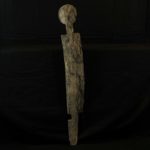 Kigango is a carved wooden memorial statue erected by the Mijikenda peoples of the southeastern Kenya coast. The vigango, which can be stylized, abstracted human-form effigies and are placed vertically rising out of the earth, honor a dead member of the secret Gohu society, or the “Society of the Blessed”.

They were traditionally allowed to stand until they naturally decomposed, or they were abandoned and replaced at subsequent village locations by a second generation figure known as a kibao (plural: vibao), thereby transferring away whatever spiritual power was thought to remain from the original kigango. This was a natural result of the Mijikenda’s centuries old practice of slash and burn agriculture and, subsequently, the periodic changing of village locations.

The Giriama (also called Giryama) are one of the nine ethnic groups that make up the Mijikenda. Each of the Mijikenda groups has a sacred forest, a kaya, which is a place of prayer. Eleven of the approximately 30 kaya forests have been inscribed together as a UNESCO World Heritage Site, the Sacred Mijikenda Kaya Forests.