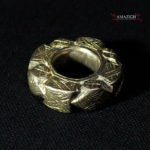 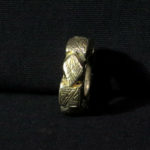 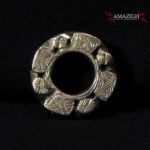 These elaborate heavy rings are Christians talismans. They are worn as pendant and are symbols of prestige.

Axum was the center of the marine trading power known as the Aksumite Kingdom, which predated the earliest mentions in Roman era writings. Around 356 CE, its ruler was converted to Christianity by Frumentius.

The historical records and Ethiopian traditions suggest that it was from Axum that Makeda, the Queen of Sheba, journeyed to visit King Solomon in Jerusalem. She had a son, Menelik, fathered by Solomon. He grew up in Ethiopia but traveled to Jerusalem as a young man to visit his father’s homeland. He lived several years in Jerusalem before returning to his country with the Ark of the Covenant.