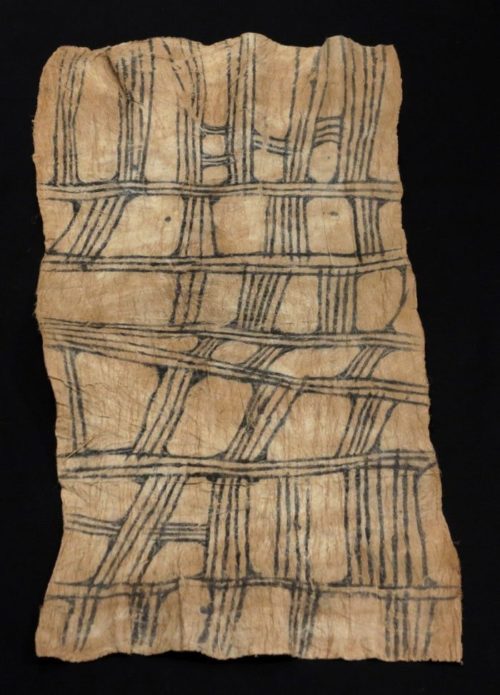 The Mbuti Pygmies live in the Ituri Forest which lies in the Northeast corner of Democratic Republic of the Congo. Survivors of an ancient race that was once dispersed over the African continent, the Mbuti now dwell in scattered bands, which are relatively small in size, ranging from 15 to 60 people, roaming from camp to camp seeking food and shelter. The forest, seemingly inhospitable to outsiders, provides natural protection for the Pygmies. For the Mbuti the forest is sacred. It is the source of their existence – their god, parent and sanctuary.  Armed with spears, bows and arrows, and hunting nets, they follow the sharply winding antelope trails in search of game. In addition to their own use, this game is sometimes traded to the agrarian Bantus living on plantations outside the forest, in return for metal for weapons. Both men and women forage for berries, mushrooms, nuts, herbs, fruits, and the most treasured delicacy, honey.

A seminomadic people, the Mbuti produce art that is easily portable. Understandably, clothing and body decoration occupy a central position. Bark cloth has traditionally b een the clothing of the Pygmies. It is worn in many ways: wrapped around the waist, or sometimes passed between the legs and held in place by a belt of braided vines. The large pieces were made by women to receive their newborn children. As trees were considered sacred, the bark was assumed to have a protective quality. The cloth is prepared from certain vines. First the bark is stripped  from the inner bark of about six different species of trees (from which depending the white, tan, or brown background colors), then is pounded flat with an elephant tusk or wood mallet. The process yields a supple fibrous canvas. This work is done by men. It is the women’s task to soften the material with water or breast milk, and then draw on the cloth with a finger or twig, usually in black or red colors. The red is derived from nkula bark and the black is made from the gardenia plant, kangay.  The elaborate process of preparing and painting a barkcloth is a social activity, and Mbuti learn how to make barkcloth from an early age.

The Mbuti barkcloth paintings conceptualize their world; they are abstract expressions of the moods and features of the forest. The paintings are evidence of the Mbuti perception of the forest as the spiritual and symbolic core of their culture. The artists combine a variety of biomorphic motifs (e.g. butterflies, birds, leopard spots) with geometric patterns that give an impression of motion, sound and shape within the forest landscape: light filtered through trees, buzzing insects, ant trails, tangled vines. Cross-hatched squares, perhaps represe
nting the texture of reptilian skin, are shorthand for turtles, crocodiles or snakes. Visual “silences” or voids in the patterns are especially valued, consistent with Mbuti concepts of sound and silence. Silence in Mbuti thought does not imply lack of sound – for the forest is always “talking” – but quiet (ekimi), the absence of noise. Noise (akami) is conflict. Sound has spiritual and magical properties.

This truly primal art is an important remnant from this vanishing people.