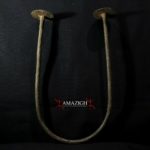 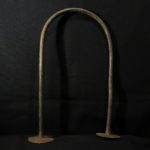 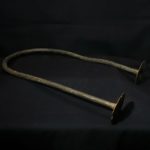 These enigmatic U-shaped currencies, made of a ca. 1 cm. section copper rod and each end beaten into a thin disk, were made by Nkushu smiths who bartered them in exchange for copper minerals from Basongo Meno. These currencies are called Konga (or Kunga) by Nkutshu and Boloko (or Okano) by Basongo Meno.

They were very important objects for the Basongo Meno who used them for paying the wedding dowry and for buying slaves.

2 boloko bought one goat or a man slave,

3 boloko were worth a female slave,

10 boloko constituted a normal dowry for a wife.

For a similar example see: