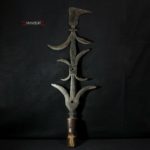 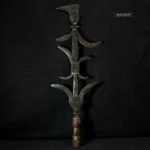 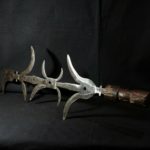 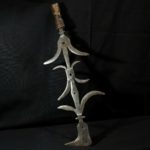 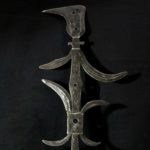 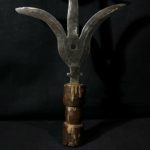 This sickle-shaped knife, although reminiscent of a throwing knife, was not used as a weapon but as a form of currency and as a symbol of rank among the Mangbetu people. The blade is of locally forged iron. It is in fine condition showing no significant oxidation.

By the early 18th century the Mangbetu had consisted of a number of small clans who, from southward migrations, had come in contact with a number of northward-migrating Bantu speaking tribes among whom they lived interspersed. In the late 18th century a group of Mangbetu-speaking elites, mainly from the Mabiti clan, assumed control over other Mangbetu clans and many neighboring Bantu-speaking tribes. It is likely that their knowledge of iron and copper forgery, by which they made weapons and fine ornaments, gave them a military and economic advantage over their neighbors.