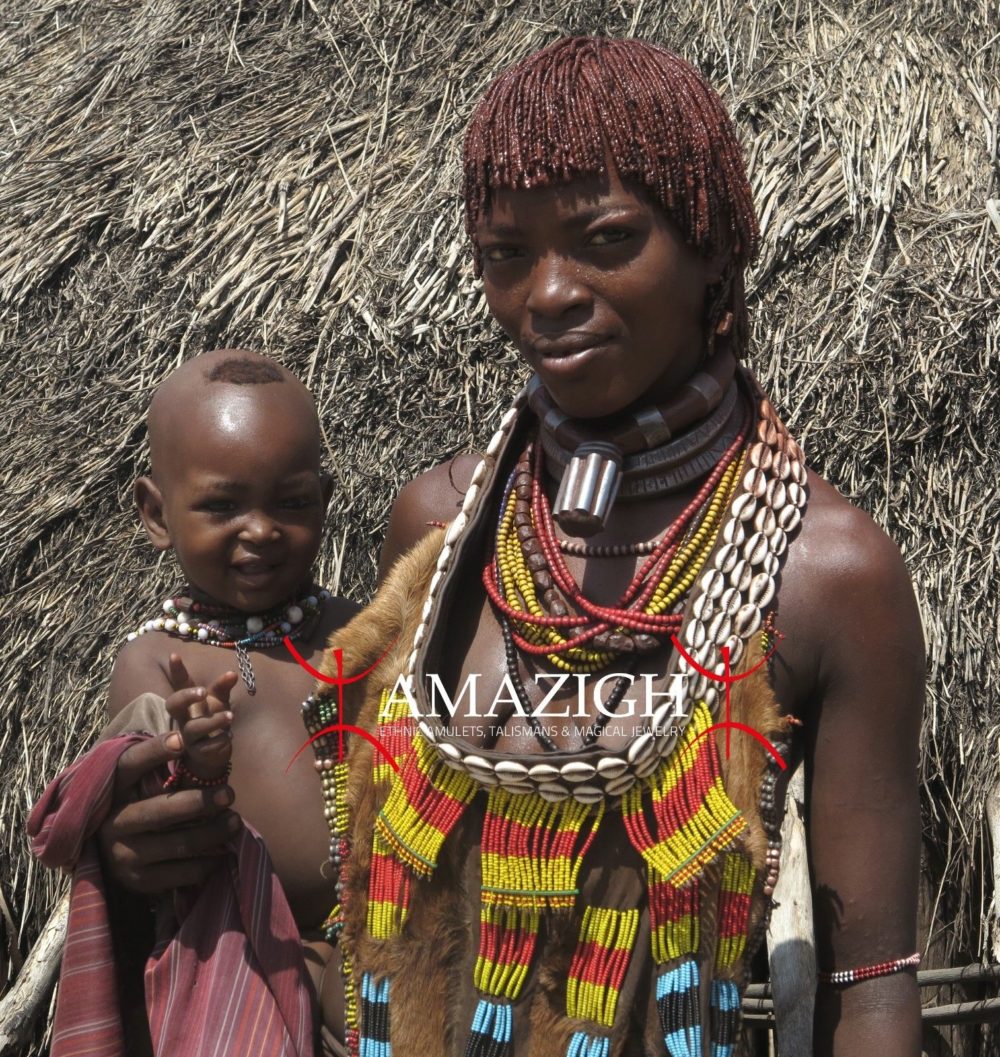 The Hamar (approx. population 61,000) are principally pastoralists, breeding cattle, goats and sheep. They have a similar veneration for cattle as their close neighbors. As with the majority of tribes in the area, the land in not owned by individuals; it is free for use by any member of the group.

They are amongst readily identifiable of all the peoples of the South Omo. Women wear an elaborately decorated goatskin, often colored with beads and cowries. Beaded necklaces, bracelets and waistbands adorn their bodies, which, for the Hamar, tend to be made with black, yellow and red beads (the Banna, their close neighbors, mostly use blue and black beads). Women wear thick copper/iron necklaces announcing their marital status. They wear a leather long tipped necklace and two copper/iron necklaces if they are second, third of fouth wife to one man.

One striking characteristic of the Hamar men and women is that they indulge in elaborate hairdressing. Men wear a clay cap which is painted and decorated with feathers and other ornaments and they often carry a small wooden headrest. They also paint themselves with white chalk paste during ceremonial events. The women decorate their hair with clay and butter twisted into a striking plait.

The Cattle Jumping (ukele Bulla) it’s a ceremony that qualifies a Hamar man to marry, own cattle and have children. The timing of the ceremony is decided by the man’s parents and usually happens after the harvest. Prior to the ceremony the male who has to jump over a line of cattle announce his intent to jump and to distribute invitations.

On the afternoon of the leap, as guest gather, the man’s female relatives demand to be whipped as part of the ceremony. The Masa (a man cho has already jumped the cattle ) uses a long stick and strikes the girls on the exposed backs. This is a consensual act, with the girls begging and singing to the Masa so that he continues whipping them. This is not only a show of strength from the girls, ho proudly show off their scars, but it also symbolizes their affiliation towards their kin. Her scars are a mark of how she suffered for her brothers and relatives.

The young man who is to leap has his head partially shaved and he’s rubbed with sand to wash away his sins. He’s then smeared with dung to give strength, while strips of tree bark are strapped around his body in a cross as a form of spiritual protection.

The Masa and the elders line up between eight and twenty cows and castrated male cattle. To come of age, the man must leap across the line four times. Only when he has been through this initiation rite can he marry the wife chosen for him by his parents, and start to build up his own herd. Once his marriage has been agreed, a dowry of around twenty cattle and thirty goats must be paid to the bride’s family.