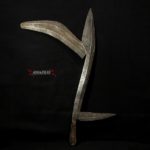 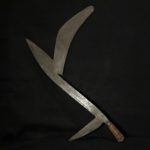 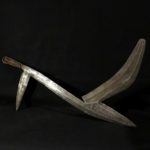 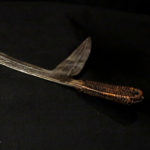 A Z-shaped throwing knife decorated with incised designs. The grip is made of plant fibres.

The Banda are a patrilineal ethnic group, who traditionally have lived in the Savannas north of the Congo, in dispersed home groups guided by a headman. They sustain themselves by hunting, fishing, gathering wild foods and growing crops. During times of crisis, to resist slave raids and to respond to wars, the Banda selected war chiefs. After the crisis was over, they relieved their warriors of their powers.

For similar examples, see pages 67 of “The Cutting Edge” by Schmidt & Westerdijk.